You just unpacked a sweet new television with crystal clear images. Set it up, pop in your favorite movie, and kick back to enjoy – until you realize the sound quality leaves a lot to be desired.

A soundbar is a slim, effective solution to your audio problem. The soundbar won’t detract from the sleek TV screen, but they do wonders with the sound. At a fraction of the cost of a large surround-sound system, soundbars are an excellent bet for home theaters.

Soundbars allow you to create a home theater feel without bulky speakers, cables, and cords wrapping around the room. They are more affordable and don’t detract from the look and feel of your television.

Since they are low-profile, soundbars are also portable and more versatile than large surround-sound systems. You could easily pack up and take your soundbar to another room or outside for a backyard movie.

There are several options to choose from, depending on your space and personal preferences. Read on for a comparison of two popular choices – the 2.1 vs 5.1 soundbars. 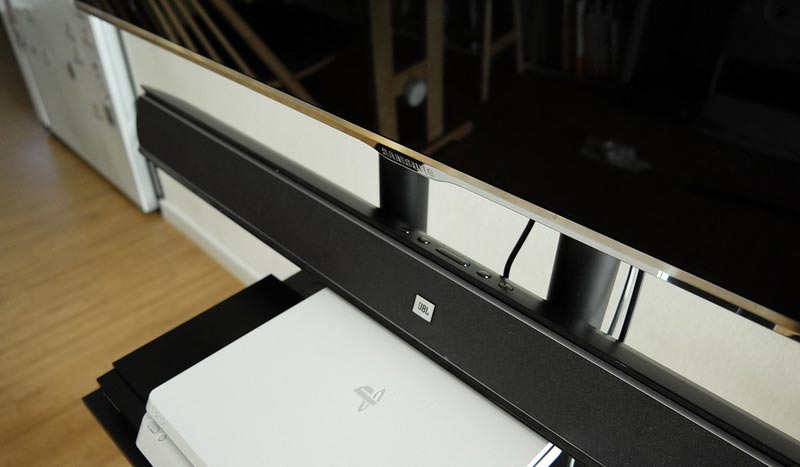 Breaking Down the 2.1 Soundbar

Let’s start with the 2.1 because it’s the most common sound system on the market. While technological advancements threaten to phase it out, there’s something to be said for simplicity, affordability, and consistent sound.

READ  Is A Receiver The Same As An Amplifier?

The 2.1 soundbars also have a subwoofer dedicated to low-frequency audio, like the booms in action movies. These subwoofers connect to the soundbar via WiFi or Bluetooth and provide clearer audio for sounds at the extreme ends of the spectrum.

Though soundbars vary by manufacturer, the 2.1s tend to have several features in common.

Again, the 2.1s have two or three speakers to set up and manage. They make for quick set up and don’t take up a lot of space.

You don’t have to worry about arranging them around the room or maintaining set distances from each other to achieve optimum sound quality.

Most 2.1 soundbars have Bluetooth capability meaning you don’t have to worry about a bunch of cables and wires. Simply install it just beneath your TV, power it up, and enjoy the sound.

You probably already guessed that 5.1 soundbars involve more than a 2.1 soundbar. They actually have five channels plus a subwoofer.

5.1 soundbars provide true surround sound with the soundbar and subwoofer near the television and the other two speakers situated behind you. The result is an immersive audio experience that rivals the massive surround-sound systems in a convenient, low profile package.

A Choice in 5.1 Soundbars: Traditional vs. Integrated

5.1 soundbars traditionally have a soundbar with three channels (right, left, and center), a subwoofer, and two rear speakers. The traditional arrangement provides surround sound by placing speakers around the room.

Alternatively, you can select an integrated soundbar that includes the two “surround” speakers in the bar. You still have a separate subwoofer, but the other five channels fit into one soundbar beneath your television. The device achieves the desired effect using angles to reflect soundwaves differently.

Integrated soundbars deliver crisp, clear audio with that surround sound feel in most rooms, but not all. If your room is too large and open, the angled surround speakers can’t reflect the soundwaves properly.

Set up may be a bit more challenging than the 2.1 soundbars, but with Bluetooth capability, you shouldn’t need to worry about cables or wires connecting the speakers.

Your set-up experience depends on the type of 5.1 soundbar you select. If you chose one with the soundbar and subwoofer, set up is straightforward. 5.1 soundbars with separate surround speakers require placement of the rear units somewhere behind you to create the proper effect.

When it comes to choosing the right soundbar for you, it’s all about personal preference. 2.1 soundbars use angles to create the surround sound effect, but they do an excellent job of mimicking the feel. On the other hand, 5.1 speakers deliver a true surround sound experience with directional speakers.

If you still can’t decide, we suggest breaking down the options and do a side-by-side comparison. Ask yourself what qualities and features are most important to youWhich one works better for you?

How large is your room, and how is it set up? Consider the size of a 2.1 soundbar, or possibly an integrated 5.1 soundbar for a smaller or boxier space. If your room cannot accommodate the additional speakers, you may want to go with the 2.1 soundbar.

Is the Price Right?

You already purchased an awesome TV, so you may have to consider what you can reasonably spend on a soundbar. If money is no object, move on to the next comparison point. For those of you with budget concerns, stay with us.

2.1 soundbars remain popular for a reason. You can generally pick up a good model for less than $100. 5.1 soundbars carry a higher price tag, and you can expect to pay more than double what you pay for 2.1 soundbars.

Soundbars generally connect to your television using an HDMI cable. You need to make sure your TV has an HDMI output port (labeled ARC).

Also, if you’re considering a 5.1 soundbar, you need to make sure our TV can handle it. If your TV doesn’t support 5.1 audio, it will revert to 2.1 audio and you won’t have that true surround sound feel. You may be able to bypass this issue by connecting your soundbar to a game console or Blu-ray player since most of them support 5.1 audio.

If you have the opportunity to sample sound before making a purchase, it’s a good idea. You can also check up on reviews to see what other people have to say about the sound quality of a specific soundbar.

Are There Other Soundbar Options?

You may come across other soundbars in your search, like a 3.1 or a 7.1 soundbar. The differences boil down to the number of channels or speakers you get in the soundbars.

For the 3.1, the soundbar has three channels plus a subwoofer. There may be a single bar with a left, right, and center speaker, or three separate speakers. It falls somewhere between the 2.1 and 5.1 soundbars.

7.1 soundbars offer seven channels and a richer audio sound than any of the others. However, they also carry a more significant price tag and take up a lot more space in your room.

Soundbars enhance the subpar quality of television speakers to deliver quality audio at a reasonable price. The addition of a subwoofer rounds out those deep bass sounds to create depth and crispness that your TV can’t handle.

Whether you’re short on space or money, you could do worse than either the 2.1 or 5.1 soundbars.

Growing up in the Nashville area, I was able to get an internship at a record label when I was just 15 years old. After that, I went on to work at the Country Music Association, where I wrote articles for their members-only magazine. Though I started in country music, I'm a fan of lots of different genres. Some of my favorite artists are The Corrs, Laura Pausini, Kasey Chambers, Shawn Mendes, and Mavis Staples.