Emmet Otter’s Jug Band Christmas is a beloved holiday special (especially in my house) produced by the Jim Henson Company with some of the best songs ever written for a Muppet property. And that’s saying a lot.

The original made-for-TV version from 1977 featured eight original songs with lyrics, as well as a few instrumental numbers that helped pad out the plot. 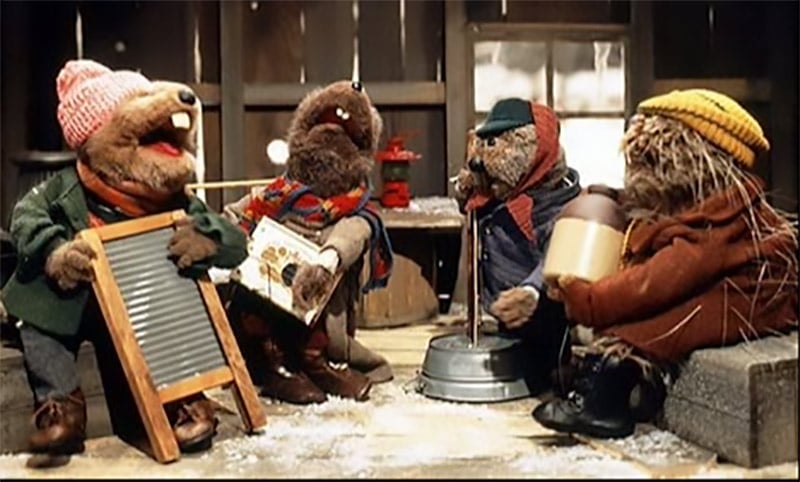 The songs from (the original) Emmet Otter’s Jug Band Christmas that included lyrics are, in order:

The stage adaptation of Emmet Otter’s Jug Band Christmas, first produced in 2008, added three and a half new songs (Paul Williams started writing one of the songs for the TV special, but it was later cut) to the already glorious soundtrack.

The new songs (with lyrics) added for the stage adaptation of Emmet Otter’s Jug Band Christmas are, in order:

Now, adding several new songs to a truly great musical property is no easy feat. (We don’t envy them the task.)

If you’re going to do it, you should do it right – that is, bring back the original songwriter to write songs that blend seamlessly into the score as if they had always been there.

And that’s exactly what the show’s producers did. (I’m sure it was a lot easier with the Jim Henson Company involved in the adaptation.)

Due to that, the four songs added to Emmet Otter’s Jug Band Christmas more than 30 years after the original film score was written feel like they’re from the same time.

They have the same sense of fun and same earworm qualities of the originals. Basically, they fit right in.

Our passionate ranking of Emmet Otter songs include all of the songs written for the show, both the beloved originals from the made-for-TV version and the lesser-known new songs from the stage play.

Ranking these songs wasn’t easy. It truly is a great score.

But we’ve done our best to whittle down to a favorite, even if it feels a bit like musical sacrilege.

And now… our ranking.

The Songs of Emmet Otter Countdown

Going for it: It adds a unique style that would otherwise have no purpose in this musical if it weren’t just a performance song, and it works well in the stage play as a moment of comic relief.

Working against it: It’s just a performance song that adds nothing to the plot and kind of blends in with the other talent show performances.

Final verdict: It’s a pretty good sign for a musical when this is at the bottom of its song list.

There are several funny lines in this song and it’s a cute introduction to the town where much of the action takes place.

It’s funny and provides a sense of place. It’s not overly meaningful to the plot and it’s simply not as funny as “The Bathing Suit That Grandma Otter Wore.”

Final verdict: Not at all bad. It’s just not strong enough to displace any of the originals.

This song has all the makings of one of the great songs of Emmet Otter, but where it could have gone big it stays a little too close to the characters, and not just because it contains character names.

It also rehashes the struggle of Ma and Emmet, which is done better in other songs and at this point in the show feels a little over-played.

There are a lot of ideas here that will appeal to a lot of people – that those who leave us are always with us, that one should never give up hope. No one’s saying it’s not a good song.

Final verdict: It’s good, just not quite good enough to move further up our list.

It’s possible I hold a grudge against this song. No spoilers, but if you’ve seen the show you know why.

If I didn’t hold a grudge, it’s possible this song would rank higher. But probably not. It does have some very clever lyrics, but so do all the other Emmet Otter songs.

But since this one contains an explicit threat and these guys are jerks, let’s put it down here.

Final verdict: Pretty rockin’, but these dudes should be in juvie.

The chorus of this song (if you can really even call it that) is so catchy, it’s practically cruel. And that’s a good thing.

At only a minute and twenty seconds, it certainly makes an impression. And will impress on your auditory memory for days.

Final verdict: Wickedly catchy. If you’re not singing this one for a good two to three days after a watch, you’re made of stronger stuff than us.

This song is a performance piece. Literally. It’s the song Emmet and his friends plan to perform in the talent contest that drives the plot of the show.

Since it is a performance piece, it doesn’t add a whole lot by way of characterization or help drive the plot forward. (It does allude, in a lesser way, to some of the same things as “Ain’t No Hole in the Washtub.”)

But it’s just so damn fun and catchy, it weasels its way pretty high on the list.

Final verdict: How has this not become a ukulele standard yet?

A song that so captures the essence of what Ma and Emmet must be feeling it’s frankly shocking it wasn’t in this show from the start.

Its message is universal – it’s scary to take a risk, especially when you have so little left to risk – and it really drives home the overall moral of the story, best summed up by Pa Otter:

“A person’s got to take some chances or life will never come to nothin’.”

Final verdict: What a great addition to an already great soundtrack and a super fun moment in the stage adaptation.

I can only assume most of the audience takes it in the spirit it’s intended. After all, there are a lot of very NICE things said about Grandma Otter, while also making reference to the fact she was a very sizable woman.

Maybe she was sizable in spirit and the bathing suit is a metaphor?

Final verdict: Questionable or not, the lyrics are funny, the tune is catchy, and Ma and Emmet sing it with the purest of intentions.

And that simplicity is what makes it so incredibly poignant.

Written more than 40 years ago, the lyrics are even more fitting today, and will no doubt become more and more relevant year after year for the next 40 years, because it captures something the human race consistently struggles with – our ability to choose love and inclusiveness over hate and fear.

And it does it as gently as a lullaby.

A mash-up of “Our World” and “Brothers,” these two songs are both perfectly wonderful in their own right, but they were always meant to end up as one.

When they come together, the lyrics slide into place like the pieces of a puzzle and the music melds into something that is at once the same and wholly new.

Most importantly, it takes one of the best songs of the show and outfits it with some of those sweet, sweet jug band harmonies.

This song has so much to do, it’s hard to believe it manages it all in less than two and a half minutes.

It reveals the state of the characters’ situation in song form, showcases their optimism and good humor in spite of it, and is just darn fun and catchy to sing.

Neck in neck with “The Bathing Suit That Grandma Otter Wore,” it edges out “Grandma Otter”  for Feel-Goodest Song of the show.

Final verdict: If you’ve ever been down on your luck, you’ll be feelin’ this one.

If any song in Emmet Otter was written to be a standard, it was this one (though, several could easily apply), because it doesn’t get more universal than this.

A metaphor about death hardly seems the thing to anchor a lighthearted Christmas tale, but the ghost of Pa is a constant presence in Emmet Otter (even more so in the stage version) and, at its core, the story really isn’t all that lighthearted. It is a story of poverty, after all.

It may seem a strange fit and top choice, but as far as songs about death go, this one is pretty freakin’ eloquent, and, in our opinion, the most beautiful in a musical filled with a combination of deep, meaningful ballads and toe-tapping bops.

Final verdict: Many songs in Emmet Otter will stick in your ears. This one will lodge in your heart.

Check out Even Stevens “Influenza: The Musical” Songs Ranked and The New Protest Songs of Mavis Staples.