If you’re a beginner or just getting started playing the guitar, you’re probably wondering what you should do first. Usually the first thing everyone does is learn a few basic, beginner guitar chords. This will most likely allow you to play some of your favorite songs fairly quickly. You’ll want to be able to have some fun with the instrument in the shortest time possible to keep you motivated to keep learning!

I have listed 9 chords below that you’ll definitely need to know how to play as a guitarist, regardless of whether you’re playing acoustic or electric guitar. This isn’t just useless beginner stuff here though. These are chords that you’ll be playing for as long as you play guitar, so don’t think you’ll never use this material. Take your time and get it right!

I’ll provide the charts for the chords, pictures of me showing you the appropriate fingerings for the chords, and even a free PDF that you can download and use for your own practice. I’ve also thrown in a bonus portion at the bottom that discusses power chords…something that you rockers will definitely need to learn!

First things first though. Let’s learn how to read a guitar chord chart.

How To Read A Chord Chart

Before we look at the chords, you need to know how to read a chord chart properly. Before I show you a chord chart, look at this picture, and memorize the order of the fingers. 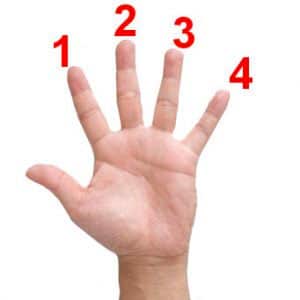 Got it? It’s not that hard. Good. Now, let’s take a look at a couple of chord charts below. (Don’t worry about that E9 chord. It’s a bit of an advanced chord and is here for demonstration purposes only. But I will have you learn the A chord guitar in this lesson). 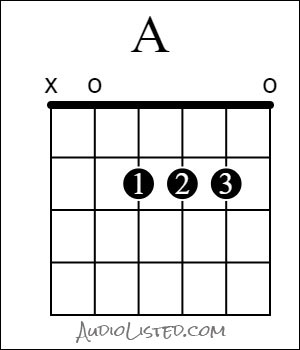 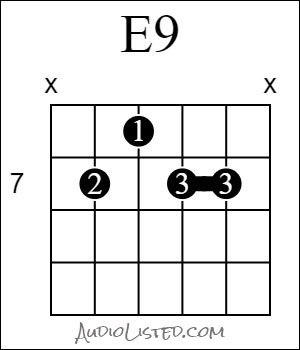 Let’s start at the top of the chart and move downward.

Imagine your guitar standing with the neck pointing straight up in the air vertically. What you are seeing in these charts represents that orientation.

What Do The Xs And Os Mean On The Chord Chart?

The X is an indication of a string that should not be played. This means that the string should be muted somehow. Depending on which string it is, you can use other fingers to mute the string, or you could just not strum or pick that string.

For example, on the A Major chord shown above, I’m probably going to be wrapping my thumb around the neck so I’m barely touching the 6th string, and muting it. Same thing for that E9. That would allow me to strum all 6 strings, but since I’m dampening the sound of the 6th string, it will not ring out. It would just make a quiet “thud” sound, but that’s okay. As you get more experienced, you’ll learn when you can play certain strings muted or open.

The Os indicate strings that should be played “open.” That means they should be played without any fingers touching them. This allows you to take advantage of the notes of whatever tuning you are in by using the un-fretted strings.

However, you must be careful not to let your fingers on adjacent strings accidentally mute or dampen the sound of strings you are playing open. Look carefully at the pictures below, and see how I am holding down the strings at a high enough angle as to not touch adjacent strings that are to be played open. 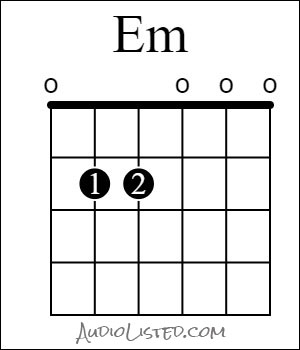 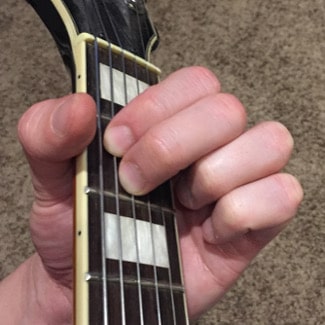 Quite honestly, this is probably the easiest chord for a beginner to learn. When my Aunt was wanting me to teach her some “guitar stuff,” this is the easiest thing I could think of. That’s why it’s the first one I’m showing you. Plus it fits right in with the key of G Major, which is a popular “guitar key.” Take note of the angle at which my fingers are touching those strings. I’m making sure both fretted strings are ringing clean without buzzing or dampening on adjacent strings. 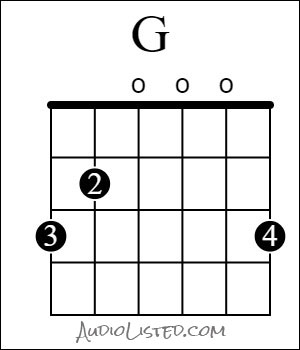 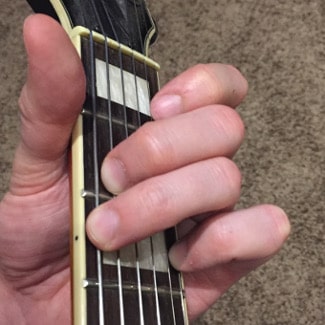 The G Major was the first chord I learned how to play. It’s challenging at first, but keep at it, and you’ll have it down in no time! NOTE: My index finger is not touching any string there, even though it looks like it from the picture. It’s just floating. Do take note, however the way my 2nd and 3rd (middle and ring) fingers are not touching adjacent strings. This allows the 2nd, 3rd, and 4th strings to ring open, cleanly. 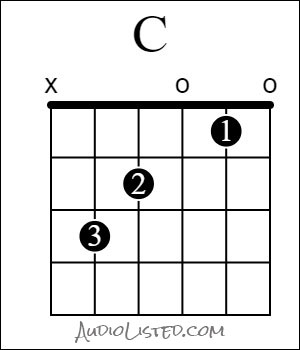 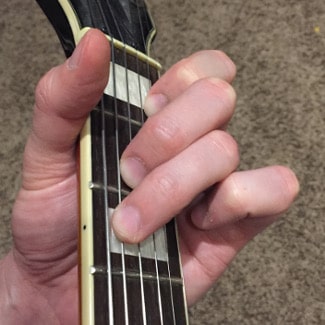 The C Major is one of the most useful chords to know. Get used to playing this one. It is obviously great for songs in the key of C Major, but also G Major as well. 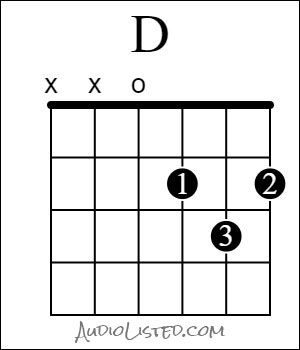 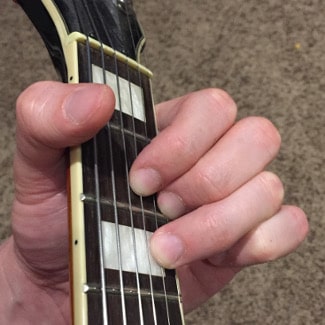 In the chart above, I have the 5th string marked with an X to not play. This is optional. If you play the 5th string open, it will still sound good, because it is an A note which is the 5th of a D. Adding a 5th to the bass of a chord is usually an acceptable thing (if not preferred) thing to do. 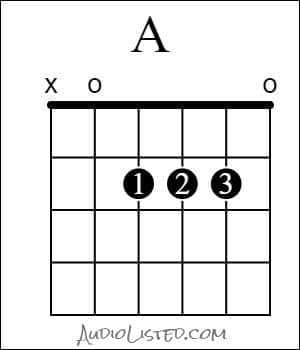 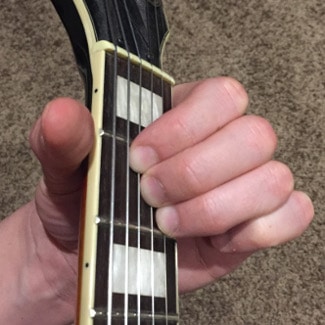 Playing the A Major chord on guitar doesn’t require too much dexterity in your fingers, but it also may take time to learn how to play it without dampening the adjacent strings (the 5th and 1st string).

It is used in the keys of A Major (obviously), D Major, E Major, and others, but those are the most guitar-friendly keys. 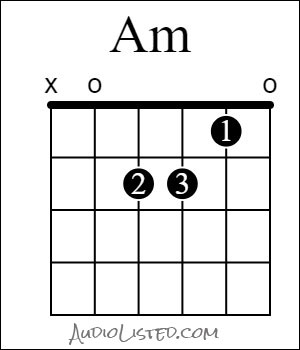 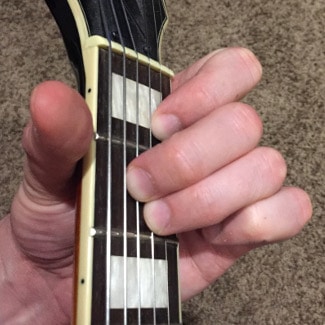 Another chord that is used heavily in the key of C Major and G Major…the A Minor chord is absolutely a “must know” chord. 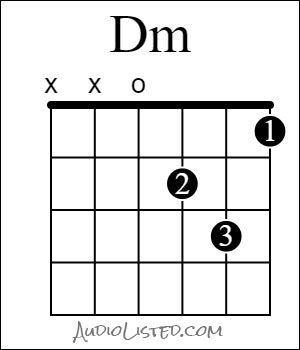 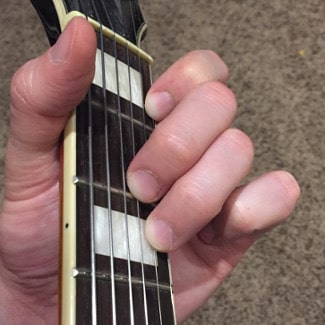 The D Minor, like the D Major is a little tricky to get used to playing, but you definitely should learn it. It’s a good one to know for the key of C Major. 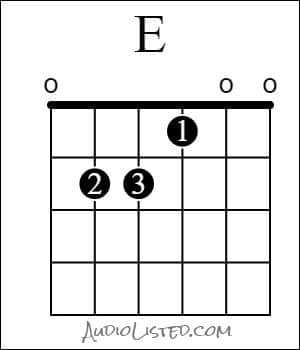 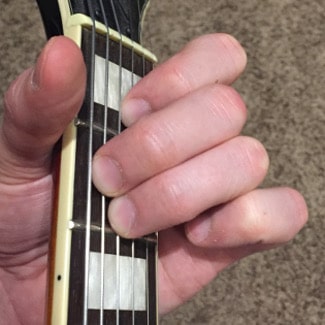 The E Major chord is just like the A Minor chord shape. The only difference is you don’t need to mute the 6th string. 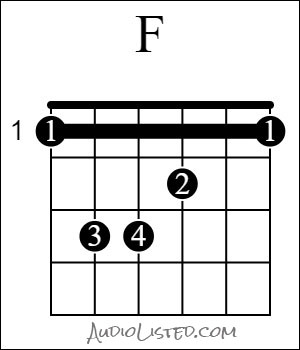 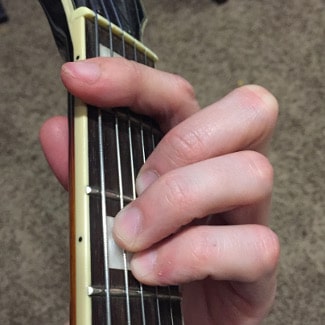 All of the chords I’ve shown you so far have been “open” chords, in that they take advantage of the open strings. This F Major chord is called a barre chord. I pronounce them “bar chords.” It requires you to “bar” a certain amount of strings behind a fret. In this case, it’s the first fret I’m barring here.

This chord is going to be a little tougher to get used to playing. You may find it difficult to fret the notes with that index finger. You may also lack the finger strength at this point, but you’ll get it with enough practice. Trust me, these chords looked impossible for me when I was getting started. Now, they’re not a problem at all. I can play them in my sleep!

You may or may not have heard of “power chords” or “five chords.” These are the chords usually played on electric guitar in rock and metal music. It produces a very heavy, powerful sound, especially played with distortion. They’re fun!

These chords may be indicated on chord sheets as A5, G5, etc. The reason they are also called five chords is because they only contain the root, the fifth, and the octave. Sometimes only the root and 5th are played without the additional octave note.

Take a look at the two examples of power chords below. 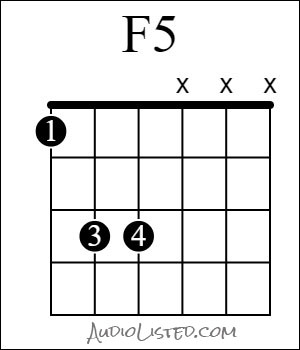 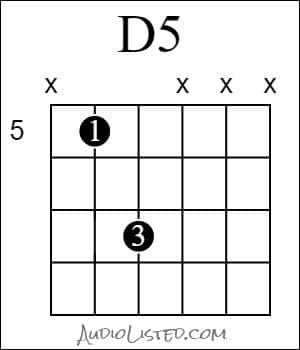 The F5 chord, as you may notice, is a slimmed down version of the F Major chord indicated on chord 9 above. It contains a root, perfect fifth, and an octave. The D5 shown above only contains the root and perfect fifth. With enough distortion, sometimes this is all you need. Practice playing them both ways. They can also be played all over the neck. It’s what we call a “movable shape.”

Here’s what an F5 power chord looks like (with the octave note). 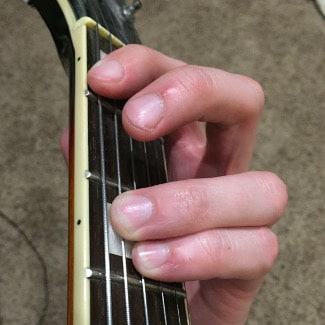 Power chords are definitely useful to know as a beginner too. You can have a lot of fun jamming out to them!

Your Free PDF Of This Lesson

As promised I have condensed this information into a PDF document available for download below.

Well, there you have it…9 (10) guitar chords for beginners to work on. If you have any interest in learning which chords sound good together check out my article on that. It takes a deeper dive into the theory behind these chords. Otherwise, good luck, and keep practicing!

I hope to share with you much of the knowledge I’ve gained in the 20 or so years I’ve been playing. I’m not just a “guy who plays guitar.” I’m absolutely passionate about music and guitars, and I want to be good! Hopefully with my articles and resources here, you can pick up some valuable information that will help you do the same.

5 thoughts on “9 Guitar Chords For Beginners With Charts, Pictures, & Pdf”